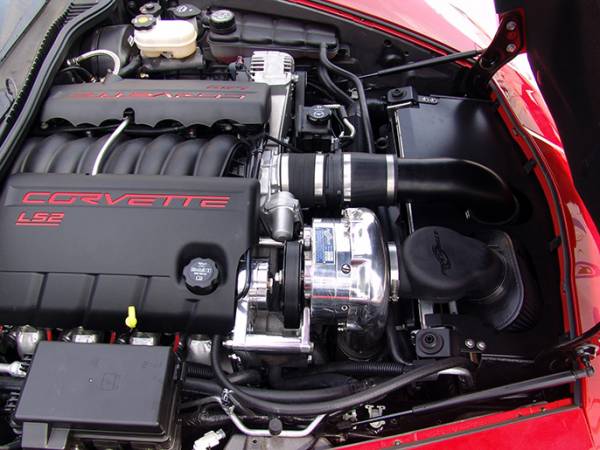 The High Output Intercooled ProCharger supercharger system has been delivering ground shaking power for Chevys C6 Corvette since it was first released in August 2005. With the coolest charge air temperatures and lowest parasitic load in the industry, this ProCharger supercharger system produces over 600 horsepower on stock LS2 motors with only 6 psi of intercooled boost.

Thanks to industry leading technology, at the same boost level a ProCharger kit can produce more power at the rear wheels than other superchargers produce at the crankshaft.

With millions of boost-enhanced miles under their tires, ProCharged Corvette owners enjoy the best of all worlds: everyday reliability and drivability combined with incredible power that is just a toe-tip away. Owning and driving a Procharged Corvette is an exercise in simplicity. With the patented and proven, self-contained ProCharger supercharger design and simple but effective air-to-air intercooling, there is no need for special fuels, additional modifications or extended cool-down times. In fact, ProCharger systems have been painstakingly designed to be installs on completely stock Corvettes no additional modifications required.