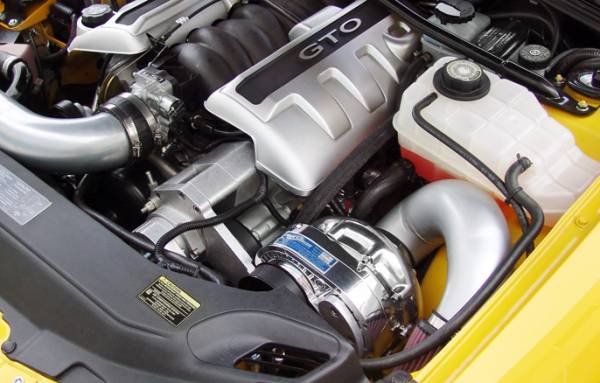 When GT was reborn in 2004, Pontiac enthusiasts now had an LS-powered performance car to amp up for the beast of the Firebird in 2002. Equipped with both the LS1 (2004) and LS2 (2005-06) engines, ProCharger once again leads the way with air-to-air intercooled supercharger systems and tuner kits for these unique GM performance cars.

Building a modified LS-based engine for your GTO? An intercooled ProCharger Serpentine Race Kit supports the highest boost and power levels in the industry. Utilizing a ProCharger F-1 Series supercharger, these race kits provide an outstanding power adder foundation on which to build your GTO racer and can even be upgraded to include an intercooler capable of handling 1,300 horsepower. This system installs in approximately half the time of other systems, with no need to punch a hole in the oil pan, replace the engine intake, or deal with all the complexity of an air-to-water-to-air intercooler. This new ProCharger system also has a much more attractive and "OEM" appearance than others for the GTO. Additionally, with the coolest charge air temperatures available, the HO Intercooled ProCharger system for the GTO produces not only the industrys undisputed largest power gains, but also the best engine longevity.