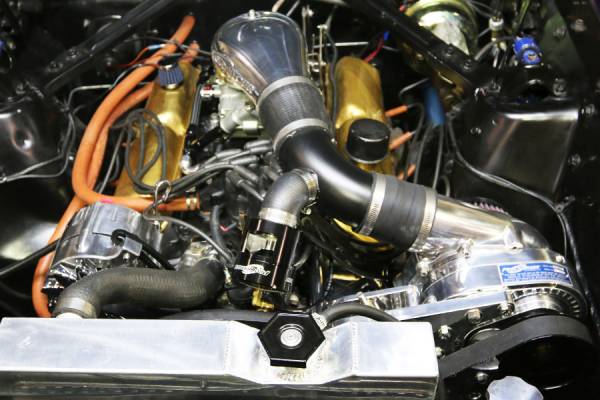 These are ProCharger’s entry level self-contained superchargers. The most popular supercharger option for early Mustangs is one of the most basic kits we offer. Don’t confuse “basic” with “weak” however. Even on a completely stock engine with a blow-through carburetor, a ProCharger system will increase the horsepower by a whopping 45%. Add an intercooler and/or aftermarket tunable EFI, and that power increase jumps even more. Built more ruggedly than the high-end “race” models offered by others, these superchargers utilize a transmission case constructed from 6061 aluminum billet. Both superchargers are equipped with a 9” volute, with the P-1SC supporting up to 825 HP. These units pack a lot of power while keeping a low profile

The 1965 to 1973 Mustangs (and other early Ford models like Cougar, Fairlane, Comet, Torino, Maverik and more) are still prime canvases for modern hot rodders to create masterpieces on and ProCharger stands there holding the performance paint brushes with kits from mild to wild for the early ponies.

ProCharger is the industry’s leading aftermarket supercharger manufacturer, for over twenty-five years, ProChargerr offers the most powerful, reliable, and advanced centrifugal supercharger systems and kits on the market. Invented, engineered, and made in the USA, ProChargerr provides the most power per pound of boost for automotive, truck/SUV, sport compact, motorcycle, UTV, and marine applications. We take great pride in being the first-to-market in offering intercooled supercharger kits and systems.