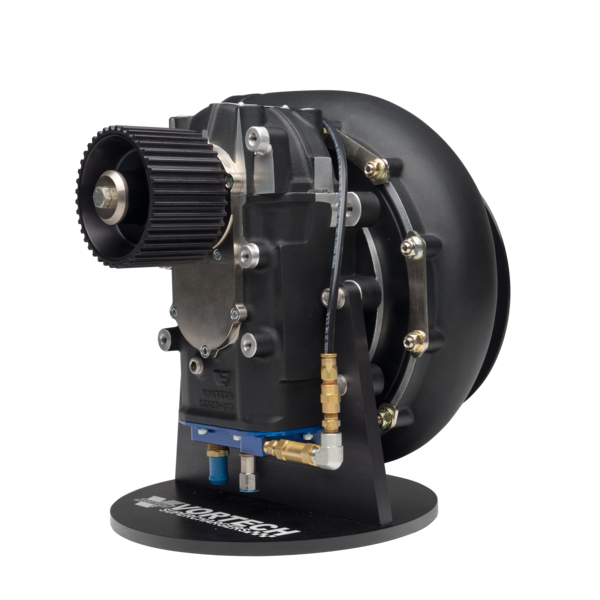 Highlights of this Vortech Supercharger

The V-30 123A Supercharger is a new compressor, replacing the existing V-28 123, and features a plethora of cutting-edge technology, including its technologically advanced, high-efficiency, 5-Axis machined billet impeller and high-diffusion housing developed in our SAE-J1723-compliant supercharger test cell.

Built to address the needs of the over 1,000HP racer, the V-30 is a clean sheet design that incorporates many years of racing compressor knowledge. The patented design employs a unique impeller shaft support system that is robust enough to endure the speeds and accelerations associated with high horsepower drag racing and the durability to perform well in the offshore boat-racing world. The modular design allows fitment of a wide range of compressor stages. All V-30 series superchargers share a 4.21:1 internal step-up ratio and are engine oil lubricated or an auxiliary system can be fabricated. Like the V-1 family, the V-30 can have different compressor stages.

The V-30 123A supercharger is designed to provide up to 45 PSI in extreme drag racing applications. Recommended to racers who are building for 6-second ET's in Super Street and Outlaw racing classes.

This supercharger has powered Vortech Supercharged racers to mid-6 second quarter mile passes at over 212 mph in PSCA Outlaw 10.5.

Its 83%+ peak efficiency surpasses all other competing superchargers, allowing for higher boost at cooler discharge temperatures.

Other, less efficient superchargers may be able to provide equal or greater levels of boost, but do so at higher discharge temperatures and with greater parasitic power loss.

Racers who switch from a competing supercharger to the 123A will be capable of lower ET's and faster top speeds due to its higher efficiency, lower discharge temperatures, and greater power potential.

The extreme durability of the V-30 supercharger design allows a single head unit to be used for multiple quarter-mile passes before being replaced, under the same conditions that cause competing superchargers to wear down and need replacement after one or two passes.

The next generation of centrifugal race superchargers has arrived! Vortech Superchargers, the company synonymous with efficient boost across the performance industry, is proud to announce the next evolution in race supercharger technology — the Vortech V-30. Utilizing notable advancements in all facets of design and execution, the V-30 is the culmination of years of research & development into new centrifugal compressor technology. Nano-Tolerance Technology, Diverging Diffusion Technology, Superior Bearing Components, and multiple advancements in Enhanced Air Inlet Design come together to produce the most technologically advanced superchargers to date. What this means to you is less heat, lower IATs, and even more power at your disposal.

Nano-Tolerance Technology (NTT) — NTT is a patented material and process that allows Vortech to minimize internal clearances, without raising the chances of internal component compromise. The result is previously unattainable levels of both efficiency and performance. Boost increase with NTT is typically 2-3psi depending on compressor stage and engine combination.

Superior Bearing Components — V-30 Series Superchargers utilize a proprietary ceramic bearing design that are unique to the V-30. Vortech also uses a unique method of lubrication in the V-30 Series that is assisted through the introduction of air/oil misting.

Founded in 1990 by Jim Middlebrook, Vortech Engineering, Inc. engineers efficient, high technology air management solutions for automotive, marine, industrial, aeronautical, and other motorsports applications.  Since our inception, Vortech has been on the cutting edge of centrifugal compressor design technology, owning several patents, and winning numerous design awards, SEMA “Best New Product” awards, and countless racing championships in all manner of sanctioning bodies all over the world.

Previously an Engineer for Paxton Superchargers, Jim Middlebrook designed a revolutionary new internally gear-driven compressor and went off on his own to start Vortech Engineering.  Focusing on the popular Ford engines of the day, Vortech quickly made a name for themselves with turn-key supercharging systems for both the Ford 5.0L, 5.8L and 7.5L engines. Fast becoming the go-to modification for all serious performance enthusiasts, Vortech expanded into many other car and truck applications, as well as creating additional arms of the company such as Vortech Marine and Vortron Industrial to meet the growing needs of centrifugal compressor technology in those fields. Almost exactly 10 years after Vortech was founded, Middlebrook purchased his former employer Paxton Superchargers, further expanding the product line and reach of Vortech Engineering to the masses.

Today, Vortech remains at the forefront of centrifugal compressor design and automotive accessory technology, with wide range of supercharging systems for all manner of cars and trucks, as well as fuel system components, air bypass components, and a popular line of charge cooler upgrades for the Ford Ecoboost line of cars and trucks. From daily driven street cars to 3,000 horsepower drag racers; Industrial airplane wing de-icers to nearly 8,000 horsepower quad-engine top speed boats, Vortech has the compressors available to get the job done, with efficiency and reliability that is unmatched throughout the industry.